After being seen by more than 200,000 spectators, travelling on three continents, the sum Carmina Burana and Fura del Baus, arrived in Palma de Mallorca, specifically the Auditòrium de Palma.

With the title, you think you will not see anything interesting, nothing that has not already seen, but hey, is La Fura dels Baus, is a company that have a name, a story, and above all, is its anniversary show for 30 years that meets the company. Just for that, if you like theatre, music, even for those who are not accustomed, even by the poster and the striking image, you decide to attend.

That’s what happened to us. And we went in search of seeing the interpretation and vision “hidden” of a work that we already knew.

The beginning was not what we expected. And although we will not reveal “the gut” of the show for those who decide to attend, we will tell our vision without going into details.

It was a show that in the end left us satisfied to have assisted.

With a specially visual Carmina Burana, of intense red–as it could not be otherwise–and with the conviction she had understood every hue of the red color–the moon, the thaw, the ecstasy, the vintage, taverns, water, and fire as elements–during all the work , that the arrival to that intense, had a whole winding route, that had not been easy, but to which it arrived giving its best interpretation and the important thing, convinces from the height.

When you get to the theater, on stage expects a great installation that you know, you will be the protagonist of the work, and so it is. And how beautiful, when an element on stage can get so much prominence.

It took a little longer than expected to be caught by the magic of Carmina Burana, but at one point came another element to the stage that became protagonist along with the artists and reminding us of the latest version of “Los Cenci” in the Teatro Español de Madrid , the water began to catch even us, the visual resources began to take more and more force and the artists heated and at the same time to the public with their strength.

Carmina Burana under the direction of Padrissa leads us to an interesting interpretation, that gives to think to the public that attends, the loss of the own being when we find in wrong relations, in difficult times and we make elections little advisable, how greed kills and DWARFSS the human being, however, causing false security in the “I” that mistakenly creates the opposite. A trip through the red color through the view and that comes to touch the public with the arrival of the countertenor Lluís Frígola. 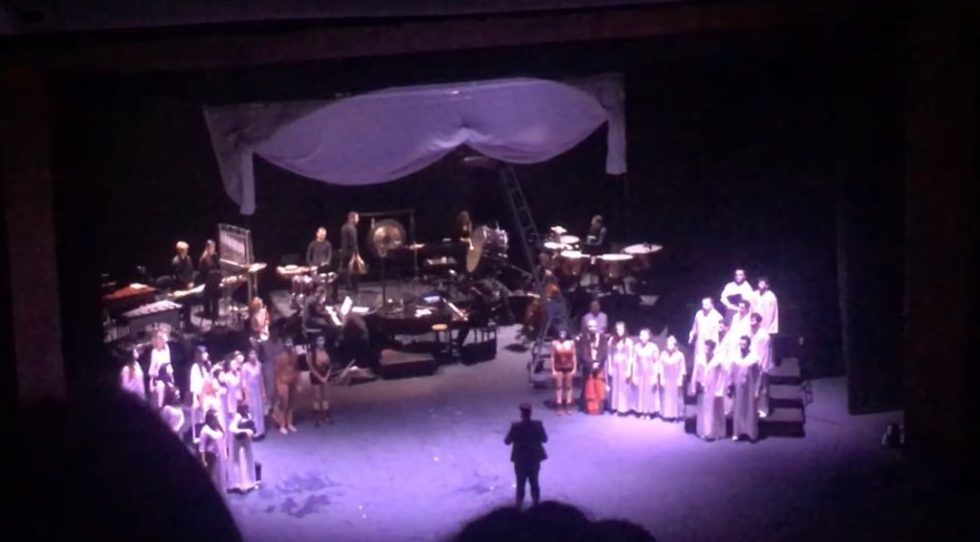